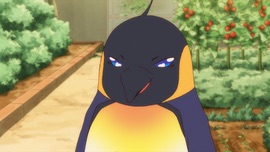 Penne (ぺんね) is the pet penguin of the Yūki family and is an emperor penguin. The family's café, Penguin Cafe is named after Penne.

Penne is an incredibly sharp observer. He is a very smart penguin who is capable of several things, such as serving customers, babysitting, and using electronics. Penne is considered a true member of the Yūki family and Penguin Cafe is named after his kind and the Yūki family's obsession with it.

Mio admires Penne to the point of it being a secret crush, but Penne teases her occasionally by acting haughty and ignorant when around her.

Penne (ペんね) is a combination between the "Pen" from Penguin (ぺんぎん) and ne (ね), which refers to the fact that every Yūki household member's names end with a "ne".

Retrieved from "https://aikatsufriends.fandom.com/wiki/Penne?oldid=4878"
Community content is available under CC-BY-SA unless otherwise noted.